A letter carrier who was bitten by a dog at a Saanich home on Monday remains off work, prompting her union local to urge people to keep their pets under control. 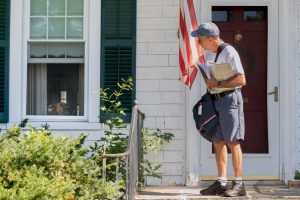 “We’re just wanting to use it as an opportunity to say to the public: ‘Please take that extra time to put your dog in another room before you open the door,’ ” said Jessica Dempster, president of Canadian Union of Postal Workers Local 850. “And then we avoid incidents like this altogether.”

Dempster said the incident happened just before 11 a.m. She said the carrier had to ring the doorbell at the home because she was carrying a parcel requiring a signature.

“This time of year, we’re ringing doorbells a lot more. We’ve got a lot more parcels.”
Dempster said the carrier has been on the job for some time.

“She’s an experienced carrier, but there’s nothing you can do when a door opens and a dog comes out,” she said.

“The dog was partially barricaded, but the barricade was not sufficient.
“The dog just came flying out and immediately bit her.”

Dog bites are the second most prevalent type of injury suffered by letter carriers, after falls. There are more than 500 dog bites involving Canada Post delivery people annually.