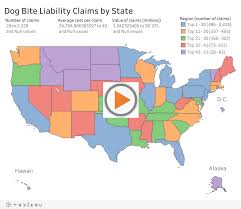 State by State Map on Claims

Dogs provide millions of people with companionship, happiness and health benefits. But even dogs that are normally docile may bite when they are frightened or when defending their puppies, owners or food.

Dog bites and other dog-related injuries accounted for more than one third of all homeowners liability claim dollars paid out in 2017, costing almost $700 million, according to the Insurance Information Institute (I.I.I.) and State Farm®, the largest writer of homeowners insurance in the United States.

California had the largest number of claims in 2017 followed by Florida. Florida also had the highest average cost per claim at $44,700.  Click here to read more. USA Map per state on claims