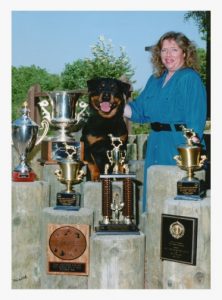 BULLI RAY was established in 1993, when owner and President Mitzi Robinson became aware of the growing need for occupational dog bite safety. After 13 years of successfully working with dogs professionally as a trainer, breeder and competitor.

The rise of canine bites.

Mitzi wanted to use her experience to begin a new business. There was no business model that reflected her vision, so she studied the needs of businesses and companies across the United States to find out how to incorporate her experience to help others. Mitzi had been watching the climate change in California, where Bulli Ray originally started. At the time, crime rates were rising and the LA riots were looming. Dog breeders were feeding the fear among the general public. As the general population looked for the answer of how to protect their homes and families, breeders started offering more aggressive dogs. The family dog was being replaced with more aggressive breeds, such as Pit Bulls, Rottweilers, and Dogos. With more aggressive dogs among the general population, it became more dangerous for field employees, such as postal workers, meter readers, and others to make routine calls. Even though dog bite incidents had increased, the managers and supervisors of these employees were reluctant to acknowledge the need for dog bite prevention  and dog bite safety training. They were not in the field any more, and weren’t aware of how the climate had changed for their employees.

Bulli Ray and the birth of dog attack prevention training.

Mitzi approached the local San Diego Postal Service after two fatalities, where she was shown the video being used to train the employees. She advised them that it was highly ineffective, and realized that she could do something to help. The Safety Specialist agreed to let her pitch a safety program – at her expense.
This was the beginning of BULLI RAY. Over the years, the curriculum has grown to include On Site and Regional classes, a Train the Trainer program, an extensive computer based training module and a full line of safety products. Companies have also become more aware of the need to provide dog bite prevention training. They have also seen the need to increase the awareness of the workplace hazards in working with animals .

BULLI RAY has grown into the only nationwide company that provides premier service at locations across the United States, with both live demonstrations and practical hands-on experience. Utility companies have made things easier for employees with automated meters and safety gear and other dog bite prevention for utility workers. Field employees know that if there is an aggressive dog, it is dangerous no matter what you do – some dogs will actually attack the vehicle itself. Dogs have been known to come in an open window on a vehicle to attack. Every field employee needs to know what to do in a crisis situation, and BULLI RAY can help.

BULLI RAY teaches not only how to prevent dog bites, but dog bite safety at work  measures if there is an encounter, and what to do if it escalates to an all out attack. There is a reason that BULLI RAY has grown into a nationwide company. We are the only company in the United States that can train your staff, regardless of location. We know dogs, and we know how to teach occupational dog bite safety. We put the tools you need in your hands to prevent dog bites.

Why the name BULLI RAY? Mitzi’s faithful Rottweiler companion was named BULLI RAY. He showed extensively with her, winning with her at the national and international level.