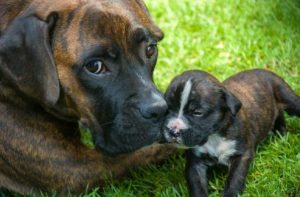 This event took place with a meter reader working for a mid-western company. We spoke to the company many times in the past about the need for dog bite prevention training, however they always had the same excuse that their dog bites were low and had no serious attacks.

UNTIL NOW! Bulli Ray received a call that they needed training, NOW! The senior manager of field operations was relieved to speak to us and asked us to come and train immediately.

It is important to understand the incident that transpired so that Bulli Ray can reinforce the needed training with all field employees. She started to say that all field personnel should have been alerted and she was a little hesitant, but then she agreed to share the story.

One of her female field employees who was fairly inexperienced was only on the job about six months when she was attacked by two Mastiffs! The female dog was over 150 pounds, while the male weighed in a 210 pounds! She was lucky that she was not killed. She spent several days in the hospital and lost large sections of her leg due to infection. She also has major nerve damage to her hand and is considered disabled.

She explained that on her route, she arrived at the location to read a meter. She made sure she paid attention to her surroundings. She watched for dogs constantly after having a few close calls previously in other yards. She has four large dogs of her own, so she felt very comfortable around dogs. This was her regular route, so she knew that there were two Mastiffs, but the owner always kept the dogs in the house. She also checked her handheld computer for any updates. She was familiar where the meter was and headed to an enclosed back porch. The back porch was used primarily as a storage area. As she was making her way through all the contents on the porch to the meter, she suddenly heard commotion behind her coming from inside the house.
Feeling uncomfortable with the sounds, she started to retreat making her way back, and that is when the door to the house flew open! The two very large Mastiffs came charging out. She manages to get to the back door, as the dogs take their first steps towards her. The dogs also had to make their way through the storage to get her. She knows that she can’t make it to the truck
and was trained to not run from dogs. She definitely didn’t want to get caught in this storage filled room. She makes it out and tries to use an old desk in the yard as shelter. The dogs are charging, and one goes around the desk and grabs her arm while the second dog goes through the middle of the desk where there would normally be a chair and grabs her leg. She tries to move, but the weight of these dogs was too much for her and they take her to the ground. She is now being pulled in different directions by each dog! She hears the owner screaming at the dogs and the woman pulls on the dog that has her arm. The dog releases and the owner heads towards the house with the dog. The other Mastiff releases her leg and follows the owner back to the house.

The owner is still screaming, not at the dogs now but at the meter reader. How stupid are you? We alerted the company that we had a litter of puppies. Why would come into the yard?? Why would you come on the porch when the puppies are just three feet from the meter!

The severely injured meter reader can’t get up, she can’t move. She’s crying because the pain. She just wants someone to help her, but the owner does not return. She is able to pull herself together, and limp to her truck to call for help.

After an investigation, they found the customer did call customer service to inform the company that they had a litter of puppies. The customer described the two large dogs, explaining how dangerous it would be for anyone to come into their yard. The information never reached field operations.

The #106 Dog Bite Stick, #213 Dog Baton or #211 Dog Stopper Umbrella are your best choices and could save your life one day! #800 Dog Bite Safety Online Training is a great training tool for all employees.