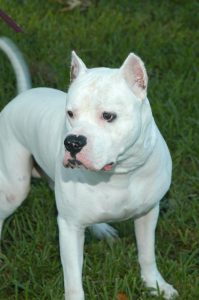 As many of you know who have participated in our programs, there is barely enough time to cover course content let alone get into story telling that supports that content based on our personal experiences with the dogs selected for our programs. In the weeks ahead, I will be writing about these “stories” and why we selected the animals that we did as well as how we saved other animals from being destroyed. Below, is the story of “Bo” our most popular dog in the history of our Occupational Dog Bite Safety Training Program.

BO’S STORY… Bo was an Argentine Dogo! He came to us when he was 11 months old and through the years became the most requested and feared dog in our training program even though he never growled, barked, or took any bites on the jute sleeve. He rocked the field employees to their core. Why??? He was a true predatory animal. In other words, he was the silent attacker…a true opportunist. At 140 pounds, he was light on his feet and knew that his ability to stay silent was a strength not a weakness when it came to attacking his prey!

Bo’s “roots” as an Argentine Dogo date back to 1928, when Antonio Nores Martinez, a medical doctor, professor, and surgeon set out to breed a big game hunting dog that was also capable of being a loyal pet and guard dog. The dog needed to be all white with the exception of a small patch of color on its face so that it could be seen and followed in the darkness of the jungle. Dr. Martinez also understood the South American Villagers’ need for this type of dog to protect their livestock from being killed by large wild cats. He knew that these herd animals were their source of livelihood producing milk, cheese, and meat. The

Argentine Dogo was created and bred to stalk a large cat for 25-50 miles. Ironically, the Dogo could not fight the large cat face to face. Outweighed by a hundred plus pounds, the dog would work hard to gain the cat’s trust by staying just out of range, following the cat stealthily for days. These large cats would then become comfortable with the dog’s presence and go back to pursuing its own prey. It is then that the Dogo would quickly prepare himself by getting into close proximity to the cat. As he hid in the thick jungle, the Dogo would attack the cat as it was distracted by the hunt. He would then take off running, hitting the cat in its hind quarters, forcing the cat to turn towards the Dogo. Quickly and forcibly the dog would grab the cat by the throat and compress his incredibly strong jaws, suffocating and eventually killing the large cat. During the attack, the cat would try defending itself by flipping itself on its back, using its feet and legs to pump deep scratches into the Dogo’s body. Fortunately, due to the Dogo’s extremely high tolerance to pain, the Dogo could continue his fight without surrendering.

In the classroom, participants would admit they were fearful of the snarling, loud barking, Rottweiler, but their fear paled in comparison to that of the Dogo. He represented the unknown…the one breed that went to great lengths to hide or ignore your presence, patiently waiting for the opportunity to attack.

As part of our training program, Anthony would bring Bo into the classroom as Bo deliberately made eye contact with every person in the front row. Once Anthony got him placed in the center of the room, Bo would sit quietly, his head pointing upwards, taking in the smell of everything surrounding him. It was then that I would slowly start to approach him while still talking to the class as if nothing had changed in the room. His nose would be up, his head slightly turned away from me. He would be panting. The closer I got to his perimeter of safety (12-15 ft.), the slower his breathing became. When I stepped into his perimeter, he would completely clamp his mouth shut, stopping his breathing. As he watched me from a side angle, his body would start to swell, filling his lungs with the oxygen he would need for the attack. As I got closer, he would lower his head and jaws slowly moving them in my direction. In order for a dog to target, he must shut his mouth and lower his head to visualize his prey. His eyes must be straight ahead. As part of this demonstration, I would come within a few feet of Bo then quickly turn away. It was then that he would explode in flight after me. Mouth open, teeth barred, his intent was clear. He wanted to take me down from behind. The class participants would gasp, shocked the dog would come so close to me! Despite the many volunteers who would interact with Bo before he entered the classroom, Bo had no interest in them once he was in front of them. To this day, participants from the many companies we trained, still remember Bo for the lesson he taught them in class.

“Bo, thank you for your endearing service to our training team and program. Your legacy in the classroom began with us in 1999 and ended when you retired in 2007. You will always be remembered for your loyalty, loving nature, and fearless protection.”