Employees sometimes refuse to carry one more thing on the job to protect themselves. When I was working for a large company in Southern California, I suggested to management that their employees carry a tool to put between themselves and an attacking dog. There was a huge uproar and even the union got involved. I needed to convince the company to start a pilot program in the field. Once the Dog Stick was proven and successfully used in defe 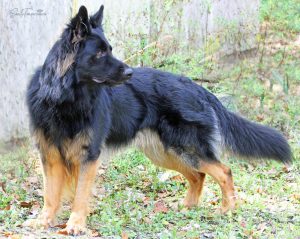 nse of an employee there would be no more negative attitudes.

Jose was the lead meter reader and the most vocal of the group. He constantly complained about carrying the Dog Stick before starting his route. He always reminded others how he’s never been bit and had enough to carry. He thought having to carry more tools would create more risk and be unsafe.

I got a call from Jose’s supervisor; he had been viciously attacked! They wanted me to come in as soon as I could to discuss the incident. I asked if Jose was going to be alright, the supervisor laughed and told me Jose was fine. I was glad to hear Jose was not injured, but curious to hear from Jose on the particulars of the dog attack.

I made time that week to come into the service center where I knew Jose was stationed. He was at our safety meeting with the managers and as I walked in everyone was smiling. They were all happy, which was a good sign. Jose came up and shook my hand and thanked me profusely! I laughed and asked what happened? Jose began to tell everyone about his incident with the dog attack.

He was carrying the Dog Stick in his left hand, the handheld computer in his right. He found the Dog Stick useful for opening inside latches, taking down spider webs, weeds and moving back bushes and branches. When he arrived at the property, he used the Dog Stick to clear out weeds to get into the gate. It appeared no one had entered since that last time he had been there. This was an easy read for him, no dogs or people around. He had never seen anyone there in the past. I then asked how long had he been on that route? He told me three years.

Once in the gate he walked quickly towards the meter which was located on the far-right side of the house. The property was enclosed with a fence and there was only one way out. He read the meter and turned to leave when a large German Shepherd was standing in front of him blocking his exit! The dog was growling and the hair on his back and neck was all puffed up. The dog started slowly advancing towards Jose and he knew to become aggressive towards the dog. “NO” “GO HOME!” That didn’t work and the dog still advances towards him. Jose backs up as far as he could, his back is against the fence. He has no place to go and would normally try to scale the fence, but knew the dog was too close. He could risk being bitten as he was climbing up, or the dog could pull him down, and attack. He went to hit the dog with his dog stick, the dog grabbed the ball and started moving backwards. Jose followed the dog as he was pulling, steering him towards to gate. Jose couldn’t believe the dog was now pulling him in that direction, trying to pull the Dog Stick out of his hands. Once close enough to his exit, he opened the gate, quickly got out of the yard slamming the gate closed. Jose is safe!

He looked back into the yard, the dog was occupied, shaking and dragging the Dog Stick around. Jose said he was in shock. Telling the group of safety professionals, he would never be without Dog Stick again! He felt it saved his life! He even offered to help create a training video to let all his co-workers know how important it was to carry protection. He knew that if he didn’t have the Dog Stick, he would have been attacked.

We were shocked to find out that the German Shepherd Jose faced that day had attacked a man who was hospitalized and in critical condition. This was weeks before Jose had been confronted with the dog. Animal control was searching for the dog. The neighbors advised authorities that it belonged to a guy who turned out to be a drug dealer. The dog had escaped his yard, attacked and nearly killed a man down the street from the home. The owner had spent a lot of money for the dog and needed the German Shepherd to protect his drugs. The dog was moved to another location, where it wouldn’t be found. The dog was known to be vicious and anyone familiar with the dog, knew to stay out of the yard. The owner was eventually arrested, and the dog was seized.

Lessons Learned:
It should be company policy for field employees to carry a device for their protection.
Always be prepared
Always carry something to put between you and the dog.

The reason the Dog Stick is effective:
The ball gives the dog something to grip, hold and compress
A dog wants to use their jaws to compress an object, it actually feels good to the dog, helps express their aggression
Using metal does not always work, the dog will only bite metal once, it will hurt, the dogs can’t compress, the dog will then look for something to compress
When the dog grabs your protection, he will start tug of war movement, go with the dog, guiding the dog towards the gate or vehicle
Reaching your arm back to hit the dog opens your vital areas up to the attacking dog

The #106 Dog Bite Stick, #213 Dog Baton or #211 Dog Stopper Umbrella are your best choices and could save your life one day!