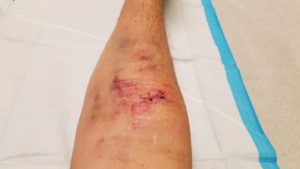 A dog owner in Penn Township is being criminally charged after his dog attacked a man.

The victim, Glen Klink, who has been working on a job site off Murrysville Road, required multiple stitches after being bitten by the German Shepherd – who lives across the street from the job site.

Klink said the workers are used to worrying about drivers, but they are now watching their backs for dogs.

“I had my back turned to the house, and we unloaded a pipe,” Klink said. “I was backing him up and I just went to reach around to grab a cone, and the dog just jumped right on my arm.”

Despite wearing “coveralls,” three sweatshirts and multiple hoods, the bite still got through. Klink suffered severe damage to his arm, requiring a couple stitches.
Klink told Channel 11 that he is just the latest victim to be attacked by the dog.

The dog’s owner, Glenn Mussong, is now facing criminal charges after Klink was the fifth person to be bitten by the dog.

Tucker Slatosky was bitten back in November. Police and paramedics were called, and Mussong was issued a citation.

Workers said it has added stress to the job, and they are worried that it could happen again if no action is taken.

“We pay a lot more attention now,” said Slatosky. “Because we know the dogs, the guy doesn’t seem to care much about keeping them contained. We try to do our job and keep ourselves protected.”