TULSA, Okla. July 2020 – A FedEx driver is recovering Wednesday night after a pack of dogs attacked him as he was delive 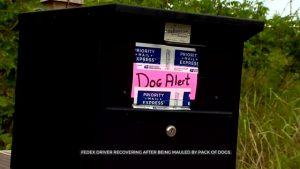 ring a package to a home in Pawnee County.
The Pawnee County sheriff said the delivery driver went up a driveway and was attacked by the pack of dogs as he tried to leave.

“This is just a very small, wonderful community,” said Noelle Waller, who lives in Terlton.

She said loose dogs are a big problem in the town.

Pawnee County Sheriff Mike Waters said on Monday, a FedEx driver went to the Terlton home, and a pack of several dogs drug him out of his truck and bit his arms and ears so badly he had to go to a hospital.

“We’re all praying for this guy and hoping we can help him out in some way,” said Waller.

That driver was just filling in for Sam Bomar, who was off Monday.

Bomar said he delivers to the home often and always has a problem with the dogs trying to attack him.

“She receives a lot of dog supplies,” Bomar said. “I have almost got bit by their dog several days one day they pinned me across the truck, and I was scared to move.”

Sheriff Waters said the homeowner put down his five dogs this morning, but there could be more dogs on the loose.

Sheriff Water said the homeowner isn’t looking at criminal charges because Pawnee county doesn’t have a leash law, but he is working to introduce one soon.

Bomar just wishes people would keep their dogs fenced up.

“They just run free and loose, and every time you come up you see the hair on their back and know they may bite you,” Bomar said.

The sheriff said they’re still looking for other possible stray dogs that were part of the attack and will do rabies tests if they find them.