Small Dogs – Why They Bite

When I complete dog occupational safety training around the country, the employees are usually very concerned about the big dogs they encounter daily, but it’s the little guys that are the most prevalent. Customers/Owners aren’t as concerned with their small dogs really hurting anyone. These dogs are usually allowed to accompany the owner when speaking to the employee. Even if the employee objects, they are usually drowned out by all the reasons their perfectly safe. Employees have shared their stories with me and even though the little dog may be clamped on to their leg, the owner shows little to no concern. 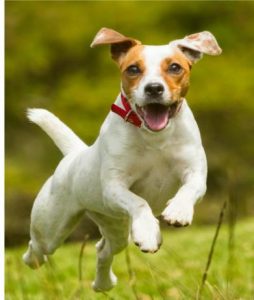 We need more education for the public when it comes to their dog(s). Literally thousands and thousands of people are bitten each year because of owner ignorance. We must understand that any dog can bite! Dogs don’t even necessarily need to be provoked in the traditional sense.
Dogs bite for many reasons:
• Fear being the number one reason for the majority of attacks
• Fear of situation that reminds them of a past trauma
• Fear of being stepped on (another trauma)
• Fear of whatever the dog may fear
• Customer is telegraphing their fear of the employee, that is usually not the employee’s fault, the dog is then compelled to back up his pack member
• The dog has not been reprimanded for biting in the past, this will encourage the dog to bite again
• Some dogs enjoy nipping/biting strangers

Postal Carrier and the Dachshund

In 1993, The Postal Service had two fatalities due to dog attacks. One employee was killed by a pack of dogs. Understandable, we have all heard of a person killed by a pack frenzy. The other carrier’s death shocked everyone, even I wasn’t expecting this one. This carrier died from a Dachshund bite. Yes, that’s right, it was a little Wiener/Hot Dog which only weighed 7-pounds.

The carrier’s route included about 350 homes daily. As with most of the homes on his route he was familiar with the occupants and their Dachshund. He struck up a conversation with the owner. Unbeknownst to him, the owners 7-pound Dachshund had snuck up behind him and bit him in the back of his ankle. The owner was very apologetic and offered to call someone for help. He said no, and declined the offer thinking it was just a little bite and nothing to worry about.
He resumed his route with no medical treatment. Field employees take this health risk every day. At the end of the day, another postal carrier found him in his vehicle unconscious. He called for help and they rushed him to the hospital. At the hospital, they cut off his clothes down to his knees, never seeing the bite behind his ankle. The medical staff tried to save the man’s life. Later it was determined that bacteria in the dog’s mouth had gotten into the man’s bloodstream, clotted and went to his heart, which killed him immediately.
This young man was only 27 years old.

This incident was the reason USPS sought out Bulli Ray Dog Bite Safety Services. They wanted to make sure that they gave their employees the education and resources to minimize any threat to them as they encounter dogs on their routes.

Lessons learned from our training:
• Any dog can be a threat! Even a 7-pound dog. Dog’s teeth are not the only harm that can come to you.
• Do not turn your back on a dog! Even the most fearful and weakest dog will bite from behind.
• Always back up against a barrier to protect your back! This also allows you to be able to watch the owner and the dog.
• Don’t discount any injury and seek treatment immediately! First Aid training is a must. Do your employees know how to stop excessive bleeding, or control shock?
• Do they know how to properly use their Adrenaline?
• Notify your manager and animal control.
• Avoid high Workman’s Compensation Costs
• Train your employees, reduce your company’s risk.

It is possible with the proper training and education, that this postal carrier could be alive today!
Mitzi Robinson, Bulli Ray Enterprises, LLC, www.bulliray.com