There are certain topics that should be avoided in casual conversation because they ignite a rash of different emotions. Religion and politics are two topics that usually are avoided and the pit bull breed is fast becoming such a topic. On one hand you have those that will defend the pit bull insisting it is the environment and owners that dictate their behavior. While on the other hand you have those that believe all pit bulls are dangerous and should be banished all together. Pit bulls have a very distinctive muscular buil 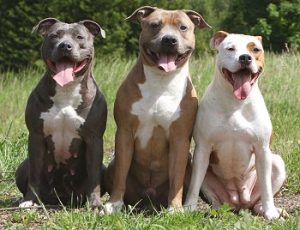 d due to their origins of the European Bulldog and eventual breeding with the terrier. The European Bulldog was used for baiting bulls, bears and holding down large animals. When baiting was banned in the 1800’s European Bulldogs were then used in dog fighting, but a more agile dog was desired and thus they were bred with the terrier. Pit bulls are now known for having a very stocky and strong build while being able to maintain extreme athleticism. They currently make up about 6% of the dog population and can range any where from 35 pounds to as large as 100 pounds. For those that love pit bulls, they are considered to be the ultimate canine gladiator, a loving animal just like any other breed, and are often described as being loyal to the very end. They are considered to be a highly intelligent breed that requires constant stimulation, and because they are enthusiastic learners constant training and physical activities are recommended. Many believe pit bulls behaviors are based on the environment and love they are given over their lifespan.

Pit bulls just like any other breed have dogs that are well behaved and dogs that are aggressive. ANY dog can be aggressive it is not just one breed. Pit bulls are often judged by their clinch, hold, and shake style attack which can result in more damage being inflicted with a single bite than many other breeds. With graphic details being shown across the internet, pit bulls now have a negative reputation that constantly looms around them. In fact, Colorado’s supreme court has characterized pit bulls as having a lethal bite that could inflict serious damage, and even compared a pit bull bite to that of a shark attack. Hearing a pit bulls bite being compared to that of a shark would incite fear into almost anyone. With so many websites displaying videos of pit bull attacks and their incredible power it has lead to the support of breed specific laws. These laws can look intriguing, but the question should be are these laws truly effective? Since there is no such thing as a bad breed should we hold owners more accountable for their animal’s behavior? The need to find solutions to lessen bites is needed now more than ever before and continued education is a must.