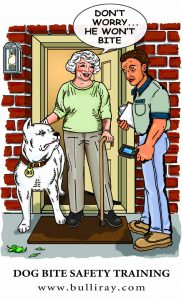 Not only can dogs be found nearly everywhere, but another factor to consider is that humans, for the most part, like dogs. From the time we are small children, most of us have been exposed to materials that produce false beliefs about what dogs really are – animals. Most dog owners humanize their pets, a phenomenon we see over and over again in TV and movies. Remember Lassie, Rin Tin Tin and Benji? This humanization goes one step further when dogs are made to talk in animated productions including “Lady and the Tramp,” “Scooby-Doo” and “Underdog.” When we start thinking of dogs as part of our family – as people instead of animals – we are setting ourselves up for problems later on.

If you own a dog, it’s likely your dog believes it’s a member of a pack that consists of you and your family members. Unprovoked and unexpected dog attacks usually occur when a new person – such as a houseguest or a baby – or a new dog are introduced into the pack.