It is no surprise that the Japanese Tosa is known as “The Canine Sumo Wrestler of the Orient.” This breed is one of the many known fighting breeds but with a BIG twist. This breed fights in competitions for honor, not blood. At least that was what the sport was originally about. Things have changed in the last 20 years–not in Japan, but here in the United States.

So Just Who Is The Tosa???
• Like the Mastiff, the Tosa is also very large and fawn or black in color. He has a short, course coat with a long tail, a narrow body, and is taller than wide. The Mastiff’s body on the other hand is very thick and heavy with lots of substance. Despite the similarities in their heads, the Tosa has more jowls, drools a lot…not a very becoming trait, and looks narrower. Their extra jowls and very loose skin come from one of its strong ancestors, the Bloodhound.

• In Tosa fighting there is no bloodshed. The dogs “wrestle” each other. If either dog bleeds, moans, yelps or vocalizes any other kind of pain, the fight is over. It is about strength and wrestling technique not gore. The first dog pinned to the ground wins!

• Never underestimate the Tosa! The Tosa can be dangerous. They are big with powerful jaws. If they are born with a bad temperament, they can be deadly. Any animal that weighs as much as a Tosa can always be extremely dangerous, especially to young children. 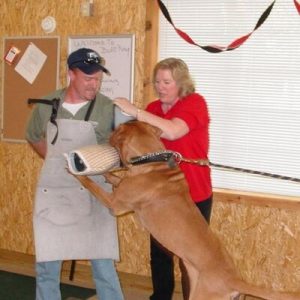 Asahi reminded me of the cartoon character “Scooby-Doo.” Anthony would enter the classroom and take Asahi to the center of the room where Asahi would immediately lay down, roll on his back, and act goofy, which triggered many oohs and aahs and laughter from the class! It was not unusual for someone in the class to say, “I’m not afraid of this dog.” “He’s just a big goof ball!” For this reason, we would bring different breeds into the classroom. It drove the message home to participants that what you don’t know will get you hurt, and the behavior you see might not be what you think!!!

Before Asahi was brought into the room, I would find a volunteer to be suited up for the attack. I would place a long leather apron that fit much like an apron worn in the kitchen on the volunteer. This apron prevented the dog’s nails from scratching the volunteer’s chest, stomach, and legs. The apron also had a hard groin protector stitched inside to protect his groin from being struck by the dog’s feet. We only asked for volunteers who wanted to get up in front of the group. Despite this, we knew there was always a risk that the person might faint if coerced or bullied. We knew from experience, that most people have extreme fears about being attacked by a dog or just being put on the spot in front of an audience. As safety professionals, we were not there to embarrass or risk an injury should the volunteer fall to the ground. (How would I possibly know this might happen???) LOL

Next a large padded sleeve was then placed on the left arm of the volunteer to protect the area of the arm the dog had been trained to bite. We would always choose someone over 5’6” to avoid Asahi coming down on top of the volunteer. To do otherwise, just would not be safe! Imagine Asahi hitting them with his feet in the face or on their shoulders not to mention that his teeth would come too close to the volunteer’s face. No one wants to risk that kind of accident!

The time had come to bring in the volunteer suited up to be attacked. Asahi would see the person but appear somewhat disinterested. Afterall, why would he get up from the comfortable place he had on the floor. Furthermore, the stranger was no threat yet!!! I would walk the volunteer closer to the dog, now pulling the person more than leading him. I would move behind the volunteer, gently pushing him closer to Asahi. As soon the volunteer would step close to Asahi’s safety perimeter the dog jumped to his feet, slowly lowering his head with a low growl to show his large teeth. His body tensed as he raised it from the floor. Asahi is very tall. His body narrow compared to a Rottweiler or Dogo; nevertheless, he weighed over 160 pounds. Now Asahi is fixated on the person in front him. The volunteer instinctively wanting to back up. The audience is yelling at the volunteer, “Man, this dog is going to kill you. He’s bigger than you are. Laughter and taunting continue throughout the demonstration. Everyone is aware of what happens in one of my classes. Sitting on the sidelines, taking a bite seems like an easy thing to try. It’s much different when YOU are the one facing the dog.

As I moved next to the volunteer, I would ask first, “Do you still want to take a bite?” Ninety nine percent of the time they would say, “Yes!” I give the handler a nod, and the dog is released. I would stay next to the volunteer holding the end of the sleeve, not because they’re not strong enough to hold it in position but because I need to control their arm movements. I did not want the volunteer to lift his arm up quickly in an effort to protect his face. Asahi is targeted on the sleeve. If they move the sleeve too quickly from where the dog is targeted, the person gets bit in the chest. As soon as the dog has a good grip of the sleeve, I would tell the person to release the bar they’re holding inside the sleeve. I then talk them through getting the sleeve off their arm. Some people panic and don’t let the bar go; I have to remind them to let it go. “I’m not talking about the dog,” I yell!” “I don’t want the dog pulling you to the ground.” The class would hear this and erupt in laugher. The volunteer would then release the bar. The handler who still has the dog on the leash, pulls the dog away bringing the dog and the gripped sleeve back to them. The dog is now being praised. I stay with the person until the handler has retrieved the dog.

My goal is to train strong and independent employees. The majority of the people I’ve trained over the years are field workers. They are in the field alone. No supervisor watching over them, and no back up. Good decision making is critical to their safety.

• Don’t assume a dog is safe because they are acting silly. Respect a dog’s perimeter, 12 -15 feet area surrounding the dog.
• If you are attacked, don’t stand with your body facing the dog. Avoid facing forward towards the dog and flat footed, this will definitely put you on the ground with the attacking dog. When attacking, a dog usually hits your body first with its feet then bites the first body part it comes to…hand, arm, or face.

Our classes were always very entertaining for us and the employees and staff who attended. I guess that is why we continue to be a favorite amongst those who attend our classes. I hope you enjoy my stories from the classroom and learning a little bit more about our favorite “actors.” We at Bulli Ray look forward to seeing you again soon! Until then, please stay healthy and safe!