Authorities on Thursday afternoon responded to a report of a dog bite at the Humane Society of St. Lucie County 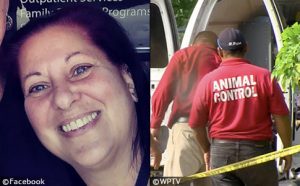 The Humane Society told CBS12 News there were no witnesses to the attack and it’s not known how long she was in the play area before someone found her.

David Robertson, the Executive Director of the Humane Society of St. Lucie County, said the dog that killed Christine Liquori, a longtime shelter volunteer, had arrived at the society’s Fort Pierce Second Chance Shelter eight days earlier and had been up for adoption for two days. On Thursday, the dog brutally attacked Liquori, killing her, in an outside play yard pen. Liquori was alone with the dog when it attacked her.