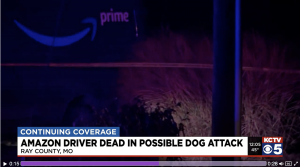 WOOD HEIGHTS, Mo. (KCTV) – An investigation is underway and two dogs are dead after an Amazon driver’s body was found in someone’s yard just outside of Excelsior Springs.

Ray County Sheriff Scott Childers said that they received a call a little after 7 p.m. regarding an Amazon van that had been outside a residence for several hours.

When deputies arrived at the scene in the O Highway in Wood Heights, they did find a man dead in someone’s front yard. It appeared that he was an Amazon driver, law enforcement said.

Amazon released the following statement on the driver’s death: 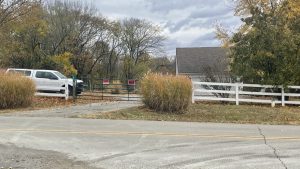 “We’re deeply saddened by tonight’s tragic incident involving a member of our Amazon family and will be providing support to the team and the driver’s loved ones. We are assisting law enforcement in their investigation.”

The Ray County Sheriff’s Office said Monday night that due to the nature of the driver’s injuries, deputies could neither confirm nor deny if the dogs caused the death of the driver.

Childers said his deputies did see a dog door with blood on it. The sheriff’s office said two dogs, a German Shepherd and English Mastiff, had gone in the house and then became aggressive toward deputies and medical staff.

Childers said he and deputies went into the home and shot and killed the dogs in order to protect deputies, medical personnel and detectives at the scene.