IDAHO FALLS, Idaho (KIFI/KIDK) — Southern Idaho postal carriers are reporting an increasing number of dog bites and close encounters with dogs as they deliver a growing number of pac 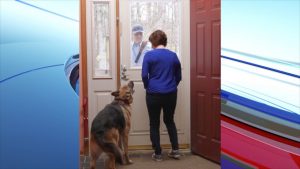 kages to doors and porches this holiday season.

The injurious scenario is often the same; Postal carrier walks up to a house to deliver a package, the customer opens the door, the dog runs out the door and bites the carrier.

According to USPS District Manager Laura Hubrich, these dog attacks are preventable.

“If a carrier delivers a package or a certified letter to your front door, place your dog into a separate room and close the door before opening the front door,” Hubrich said. “Dogs have been known to burst through screen doors or plate-glass windows to get at strangers.”

So far this holiday season, three Southern Idaho postal carriers have suffered dog bites with hundreds of reported close calls. Some of the attacks resulted in medical attention beyond first-aid, and in carriers being unable to return to their normal duties for a period of time.

“We take the safety of our employees seriously,” Hubrich said. “We strongly encourage our customers to restrain their dogs and allow our carriers to safely deliver the mail.”

Nationwide, the week of Dec. 15-21 is expected to be the busiest mailing and delivery week of the year for USPS with 28 million packages projected to be delivered each day, including tens of thousands in southern Idaho.